It's time to decide, once and for all! 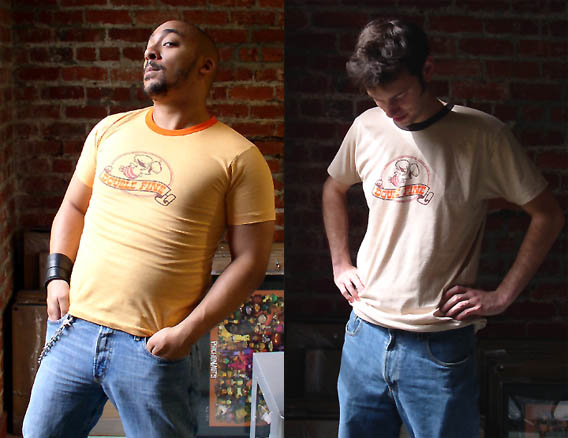 It's so hard to tell right now from these pictures because they both have specific things that make them cool that the other guy doesn't have. Like that wallet chain. And the arm band. Hm.

Let me see if I can even things out a bit, so we can compare them more fairly.. 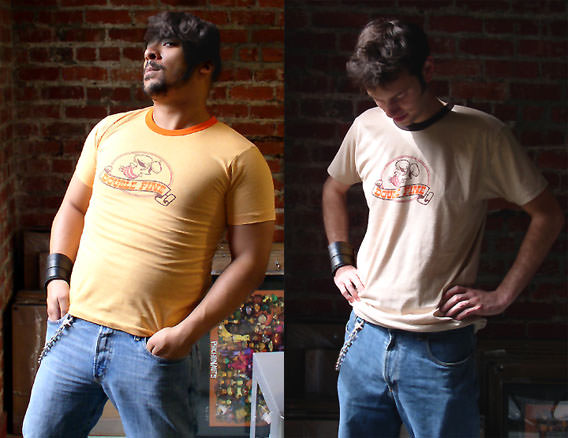 Yes... yes, that's better. But still, they are both so much cooler than your average person--partially because they are both wearing our NEW STYLE DOUBLE FINE SHIRT, NOW AVAILABLE IN OUR COMPANY STORE IN TANGERINE AND TAN--that it's hard to judge their relative coolness. It's like saying which number is larger, 10,000,000,000, or 10,000,000,001? Impossible to say! The answer is unknowable

Our new shirt is replacing the old, orange one(

). It comes in nicer colors, it has a stylish ringer neck, and it's made by American Apparel which by itself is as cool as a wallet chain, leather arm band, and hair all in one. Cooler than that, because a leathery chain covered in hair would be gross.

Investor alert: we only have something like ten of those old, orange shirts

left. And after that we're only going to be re-ordering the new style. So that old shirt

is about to become an extremely rare collector's item. That's right--the very first Double Fine shirt ever made

Which one am I telling you to buy? Here's my advice: Get the old style shirt

, put it in a Mylar bag (Throw out that copy of Daredevil #181. It's never going to be worth anything) and lock it in a safety deposit box as an investment. Then buy the two new shirts, and wear the Tangerine shirt when it's sunny out and you're feeling like promenading around town. But when it's overcast out, slip into the Tan shirt to explore your contemplative and thoughtful side. If needed, add pants to the outfit

By the way, our new game is awesome, but it's going to be a deep, dark secret for another year or so. So sit back, and relax, and get ready to enjoy a long period of absolutely meaningless news items littered with shameless merchandise plugs!

Here's one now: Today at Double Fine, Alex bought a new bike! And it's kinda the color of this shirt