We're not quite sure why this article is titled "e" either. But we figured it's been that way since 2006, so we had best leave it like that.

Guess which one of these guys is not in the band?

Here we are at the signing table at the Video Games Live concert last Thursday. The well-dressed one is me, and then that's Clint Bajakian, Michael Land, and Peter McConnell--The creators of iMuse and the sound of old LucasArts! One or more of these guys has worked on every game I've ever been a part of, and it was fun to have a reunion with them, even if they could not be bothered to put on ties because, what? I guess it would have killed them to look nice at the Hollywood Bowl? Pffft! Musicians!

Still, it was a good time. Before the concert there was this "meet 'n' greet" where I forced some fans to come over and talk to me so I wouldn't look like a loser. They were all really good sports about it.

But there was this one guy there who really got my attention. I think it was because he was absolutely butt-naked, except for 49ers cap. It was cold in the Hollywood Bowl that night, and I felt bad for the guy, so I reached down my collar and pulled off the undershirt I was wearing (without taking off my suit--one of the many skills you learn when you watch Flashdance as many times as I have) and even though it was one of the incredibly rare, tie-dye Psychonauts t-shirts, I gave it to him anyway, and here is the photographic proof: 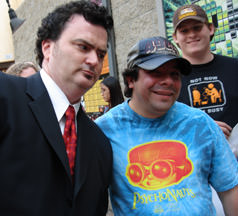 (The guy behind him is smiling because I, unfortunately, did not happen to have any extra pants to offer this cold fan.) 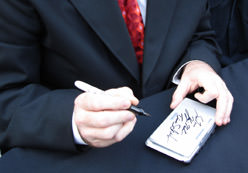 More than one person asked me to sign their Nintendo DS. I still haven't quite figured out why... 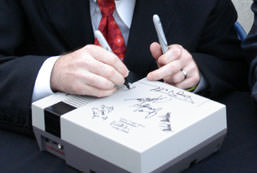 ...but this, actually, kind of made sense. The kid who had me sign his NES was obviously a fan of Maniac Mansion, and specifically, he must have been a fan of how the objects in the NES version highlighted properly when the cursor was over them even though they were in slightly different locations than in the PC version. He must have known that I was one of four "Scummlets" who spent days lovingly re-aligning each object tag by hand.

Here is a picture of how excited he was after I explained the process to him in great detail. 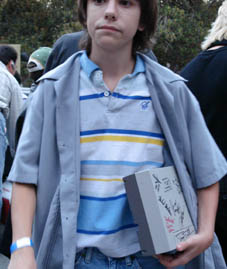 Ha ha! Of course I'm kidding! He was miserable!

But in all seriousness, the fun part of the show began when the lights went down and the musicians took the stage. The orchestra played music from Final Fantasy, Zelda, Metal Gear Solids, a little more Final Fantasy, God of War, Myst, and then a big Final Fantasy medley to wrap it all up. And then Clint, Michael, Peter, and Larry the O set up their four-piece band and played a little Outlaws, Grim Fandango, and Monkey Island music! I'm going to put up this picture and just hope Tommy Talrico doesn't sue me: 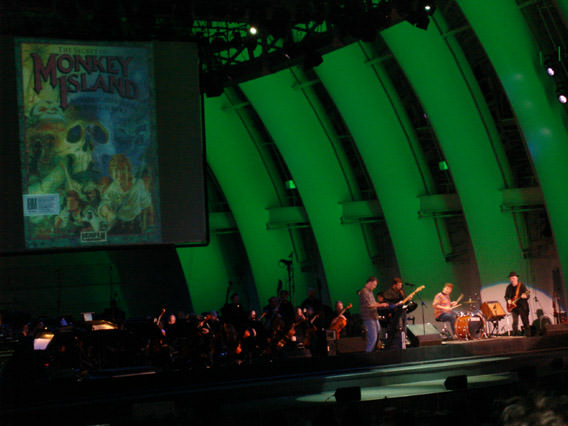 In the ten years I worked with these guys I have never heard them play any of this music live, and really, I don't think anyone ever has, so it was pretty exciting. They sounded great. I really think they should do a whole concert of just these guys playing their classic LucasArts compositions. And then for an encore, George Lucas could walk on stage and we could hand him all the money we made that night.

I wish you could have been there! Maybe if you mail the friendly people at Video Games Live and ask--very politely--for more LucasArts music, you will get a chance to hear these great musicians when the show comes to a town near you.

Now, I KNOW Tommy would kill me if I put up a video from the show. So I won't. But I did find a video on YouTube that someone else put up, so if I link to that... well, that's okay, right? Right.
Nothing associated with YouTube could ever be morally questionable, I'm certain. 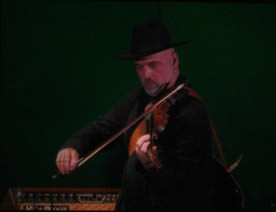