If you know me, then you know I loveD America, and that is why I chose to base my gaming empire here in this quaint, adorable country. But it's important to be able to say when an idea is just not working, and to walk away. And that's why I'm moving to England.

Not forever! Just for a little while. Approximately four days is how long I will be moving to the UK. I know some people may call that just a "visit" but I really want to make a statement about how superior the nation of England is to the formerly great state of America. Not in every way, but in these two incredibly important ways:

1. The British Academy Awards (unlike ours) have a whole set of categories dedicated to VIDEO GAMES, believe it or not!

2. The Excellent Game Psychonauts is nominated for one of them!

Check it out. Look under "Screenplay." Holy crap, guvnah!

When you see that, you probably wonder the same thing I did: Are the British flirting with me? First the Eurogamer Game of the Year thing, and now this? I'm MARRIED, England! I'll take your award, but I don't want to lead you on in any other way. Oh, wait. Except for your clotted cream. I'll take that as well. And Heinz tomato soup. You can't get that here. But that's all I want from you. Except for maybe a Father Ted DVD. And some fish and chips. Fish and chips and a Father Ted DVD and some Heinz tomato soup and the award for Best Screenplay in a Video Game from the British Academy of Film and Television Arts and some clotted cream. And a prawn mayonnaise, and a Stonehenge. 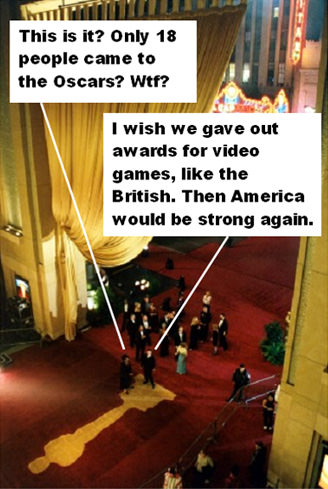 I love you, England... for now. I will be up in your business October 5-8 to pick up our award. If I don't come back home with that golden mask then I promise you, I will fill Boston Harbor with copies of Oblivion and then we'll have to go through that whole mess again with the shooting and the yelling.

AND THE WINNER IS… HANDSOMENESS March 27th 2007