Okay, so you probably do not care about Monkey Island or floaty pens, but I do so let me just write this down and you are free to not read it:

Here is what the floaty pen for Monkey 2 was going to look like: It was going to have Guybrush, rowing his little coffin boat through the marsh on the way to see the Voodoo Lady. You could tilt the pen and slide him down toward the International House of Mojo hut at the end. At least you could on paper. I made a fully functional paper mockup, with cutout sliders that you could move back and forth like a popup book. I’m not bragging, I just want you to know why I was so bitter. And how good I am with paper.

Also, I did the research. I called Denmark. Or at least someone in South San Francisco who knew somebody in Denmark. I had it all figured out because I wanted it to happen so very badly. For some reason I love floaty pens way too much. I have hundreds of them here in the office, in old “Defenders of Dynatron City” promotional cups.

Hey, do you know what that mysterious liquid is inside the floating chamber of a floaty pen? Do you? Because I do. No, it’s not water. (Unless you have one of those cheap, imitation floaty pens. They put water in the knock-offs and that’s why they don’t work right. The motion in the water-based pens is jerky, and unpleasant. Just thinking of it makes me want to puke. Ug!) In the authentic, made-in-Denmark floaty pens, they fill them with delicious oil. I crap you negative. That’s why they slide so smoothly. That’s what makes them magical. And that’s why I wanted one so badly for Monkey 2.

So did we get them?

No. The marketing department said no. Until the Sam and Max team asked for them, and then they said yes. Why? Because everything in the world is bad and nothing is fair. I have been pouting about this for about thirteen years. Until now: 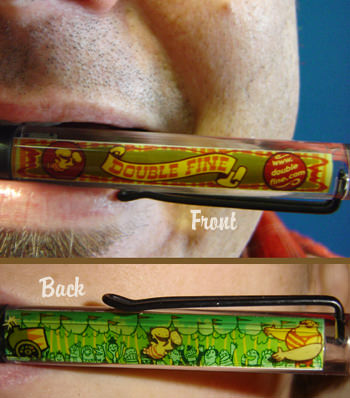 Stop looking at that suspicious mole on my cheek and instead look at that beautiful pen! Omfg, Double Fine floaty pens are here! And don’t worry—I only put that one pen in my mouth. The rest of them are clean.

This sliding pen tells a symbolic story of the life of the artist, Scott Campbell. The cannon, of course, represents his mother’s fiery womb. (Hi Mrs Campbell!) The strongman at the end of the child’s journey represents the strong man Scott hopes to grow into someday as an adult. And the people in the crowd all represent actual people that Scott has had to kill along the way to make it to the top. It’s like the Godfather 1 & 2 in a pen! How can you refuse this offer?

REFUSE NOT, that’s how! Go to the Double Fine Action Store and acquire one for yourself. (And buy two hoodies while you’re at it. They’re on sale!) Buy two pens, too, so you can write with one, and then break the other one open to see that I am not lying about the oil inside. Then, watch in horror as the strip of plastic with the 2-headed baby flaps around on your oily floor, gasping for breath like a goldfish in a Faith No More video. That’s a lot of entertainment for eight small dollars!