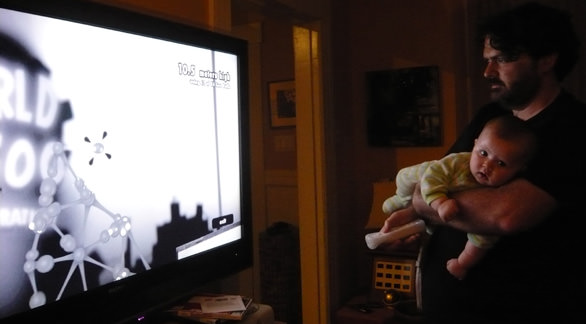 One of the things I love about World of Goo, besides the fact that you can play it while holding a baby, is that it reminds me of building toothpick-and-pea towers in the third grade. Did every third grader do this? And I said “pea” as in the small, green vegetable. The teacher would soak peas in water and then we’d take toothpicks and stick them in the peas and build huge structures on our desks. Or, at least, they seemed huge at the time. And even though I didn’t know anything about mechanical engineering as a child, I could FEEL the rules as I worked with the toothpicks and peas. Even though on paper it seemed like a square should be as sturdy as a triangle, when I built it and held it in my hands I could feel the difference. And that same thing happens when I play World of Goo. I still don’t know anything about mechanical engineering, but I feel like I might be a mechanical genius.

I drive across bridges and think, “Hm. I could do better.” Especially when I’m driving over that part of the Bay Bridge that fell down during Loma Prieta.

My daughter Lili is also a genius, and she likes the game as well. But that’s mostly because it’s the brightest thing in the room.