Hello! This is Kee, the project lead for Middle Manager of Justice.

You may be asking questions like, “Hey, where is that Middle Manager of Justice game?”, “Didn’t that come out like a month ago?”, or “What should I have for lunch?”.

The answer to one of those questions, clearly, is ribs. You’ll never go wrong with ribs, guys. Ribs. Also, the Middle Manager of Justice team is hard at work killing bugs (the virtual kind, not the real kind. Be nice to the environmentm folks! Unless it’s creepy looking), polishing the game, and reacting to the feedback we’ve gotten from when some folks got a sneak peek due to my itchy trigger finger. It’s coming soon, and thanks for being so patient! Superheroes will be filing paperwork on your iOS devices in no time!!!

For the time being, I want to share with you, the Internet, the SECRET ORIGINS of Middle Manager of Justice. No, it doesn’t involve radioactive spiders, although it would’ve been pretty rad if it did. First off, a tiny bit about myself. Double Fine is my first game industry job where I’ve worked as a gameplay programmer. I contributed in that capacity to Psychonauts (I may or may not have worked on Meat Circus, depending on whether you liked it), Brutal Legend, Stacking, and have helped out on a bunch of the other titles. One of my first tasks here was to work on Fred Bonaparte’s idle behavior in the asylum in Psychonauts.

As you may know, Double Fine periodically divides up into teams to work on new two-week prototype games. We call it Amnesia Fortnight. For the last AF, I wanted to make a superhero management game for mobile devices. When trying to come up with a clever name, I thought of the soccer sim Football Manager. From that, Superhero Manager (boring!) evolved to Middle Manager of Justice! Then I realized how fun it would be to juxtapose all the superhero stuff with the everyday humdrum life of a corporate office. Tim greenlit the idea for AF prototyping, but there was on tiny wrinkle. I would not be in the office for the meeting where we introduced our AF idea to the rest of the team. So I improvised…

I had initially envisioned the game with a lot of nondescript superheroes, with simple palette swaps to differentiate them. With a small team, this seemed to be the most conservative and economical way to go. However, prototype team’s animator, Dave Gardner, just went crazy (the good kind of crazy) with an assortment of unique and awesome characters that may or may not break copyright laws. (Bear in mind, all the artwork in this post was created during that two-week prototype phase. The real game is much more polished, featuring the amazing artwork of Mark Hamer.)

This showed me that we should focus on unique characters with their own backgrounds and story arcs for the game—the stuff that we here at Double Fine enjoy doing! The game itself had heroes patrolling territories, training, socializing, and fighting crime. The goal of the game was to bring each territory down to zero crime level. 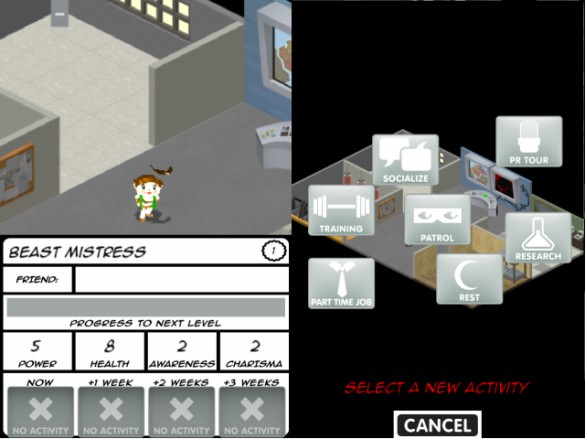 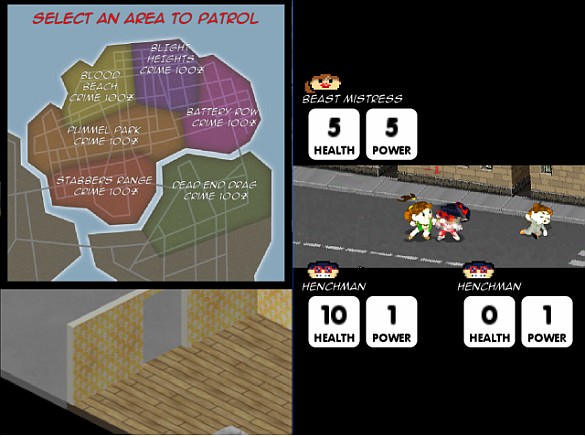 This prototype was built in two weeks using the MOAI engine and was tuned to play well for AF, meaning playtime for an average player would be about an hour. When the decision was made to create the full game, one of the challenges was to bring the experience to a longer game without losing what worked well in the prototype. More on that later!

Thanks for reading, and thanks again for your continued interest in Middle Manager of Justice!! 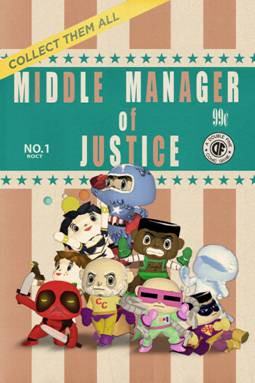 Man, I could really go for some ribs right now…