So, I did this interview a while back with Rob Smith. He said it was for a book about LucasArts—a complete history of the company from the old days up until now. Surely, I thought to myself, there can be no harm in doing this interview because such an unlikely book will never be published. That would be madness! Rob Smith is obviously insane! (But I did not say this at the time because I did not want him to become insanely violent.) Apparently, Chronicle Books is also insane, because look! 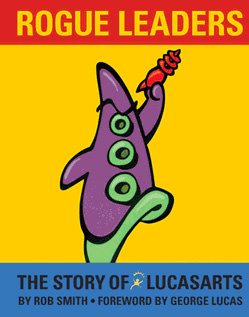 They made the book! And I have a copy of it in my hands right now and I can say it came out really well. It’s got a fancy wiggle picture on the cover that alternates between Purple Tentacle, Guybrush Threepwood, Darth Something-or-Other, and that whippy guy. And inside they have a ton of old concept art, including stuff I’ve never seen before. Some of it is from games that never got made. It’s awesome, and quite heavy.

Day of the Tentacle Remastered

At least they had Tamales there. December 5th 2008