Today marks the TWENTY YEAR anniversary of my time in the games industry. Twenty years! Next year I’m going to take my career out for it’s first legal drink. But this year, in honor of its hemisesquicentennial anniversary (that’s actually 75 years, but it sounded so much cooler than “Vigintennial”) I’ve decided to put up some historical documents so that you can all laugh at how unqualified I was for this job, how lucky I was to get it, and how screwed I would have been if I hadn’t. Also, I hope it encourages you job-hunters out there. If I can get a job in the games industry, ANYBODY can. (Not at my company of course. I would never hire somebody as unqualified as I was! I’m just lucky finding people smarter than me is so easy.) 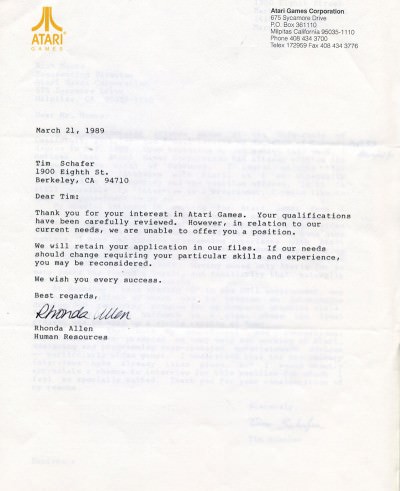 Yeah, that’s right. I got dumped by Atari in 1989. Try to remember that this was not the company you call Atari today. This was, to me, still the company that made the greatest computer of all time, the Atari 800, plus all of my favorite childhood games. It was an incredibly nostalgic dream to work there, not very well thought-out on my part. And luckily, squashed by the pitiless Rhonda Allen. Thank you, Rhonda.

But Atari wasn’t the only rejection letter I got. Check this out: 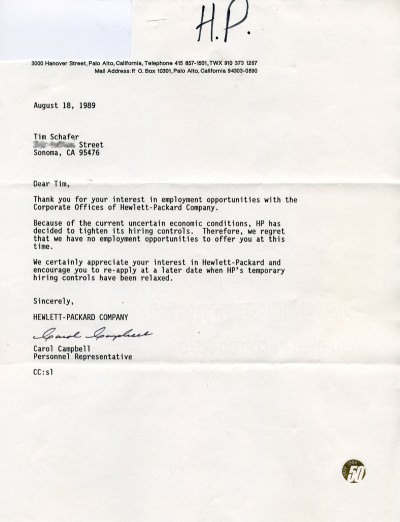 Even I can’t believe I once applied for a job at Hewlett-Packard. But, see, I read once that when Kurt Vonnegut, Jr. was getting his start he worked at General Electric during the day, and wrote short stories at night. And if it’s good enough for KVjr, it’s good enough for me. I figured I’d strap on a pocket protector, get myself one of those giant sliderules, and masquerade as an engineer all day. But then at night, I’d put on my tweed jacket with the elbow patches and drink scotch while pounding away on an old Smith-Corona typewriter. (Okay, I didn’t actually dream that pretentiously, but I did have some romantic notions about writing.) Luckily, I wasn’t a good enough engineer. Thank you, Carol Campbell!

My job hunt was getting kind of depressing. I was building up a pile of rejection letters, most of them from jobs I didn’t even want. I got rejected by a company that made library cataloging software. Stuck-up jerks! I bought a tie for that interview! I ironed my PANTS.

But then, one bright summer day, I walked into the campus career center and saw this: 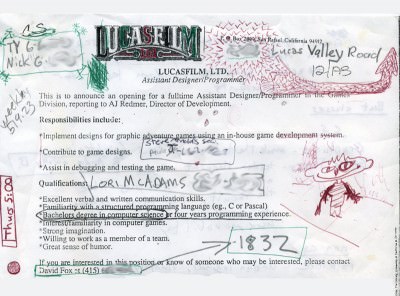 That’s the original posting for the “Assistant Designer / Programmer” position at Lucasfilm, Games Division. A job I would later find out was called internally, “Scummlet.”

I called David Fox right away and scribbled all the notes you see while I was talking to him. I told him how much I wanted to work at Lucasfilm, not because of Star Wars, but because I loved, “Ball Blaster.”

“Yeah! I love Ball Blaster!” I said. It was true. I had broken a joystick playing that game on my Atari 800.

“Well, the name of the game is Ball Blazer.” Mr. Fox said, curtly. “It was only called Ball Blaster in the pirated version.”

Totally busted. It was true—I had played the pirated version. There, I said it. Now, if you’ve ever pirated one of my games you don’t need to feel bad, because I did it to Lucasfilm Games when I was in high school. Of course, if you’ve pirated two or more of my games, that’s a different story.

The rest of the phone call didn’t go much better. But at the end of it, David told me to send in my resume, along with a cover letter describing my ideal job. Since I figured I had blown the interview, I had nothing to lose. So I did my cover letter in the form of a semi-graphic adventure. I drew the pictures on my Koala pad, and printed the whole thing out on my Atari 800 dot-matrix printer.

I’ve told this story many times before but I’ve never shown the actual letter. Here then is the WORLD PREMIER of what will surely become the standardized temlate for all future job-getting letters: 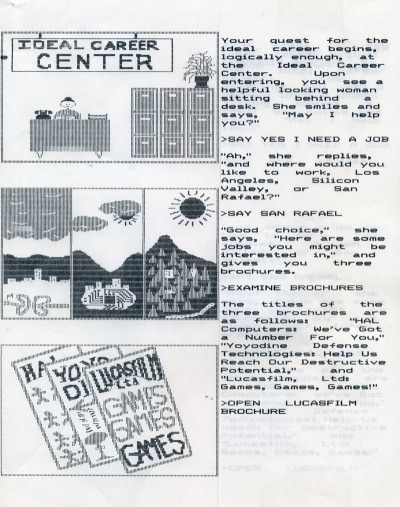 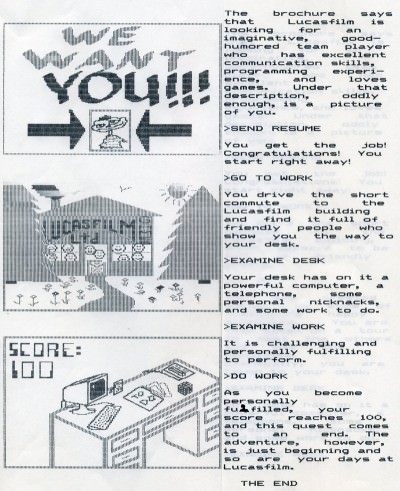 What’s even more freaky is this: 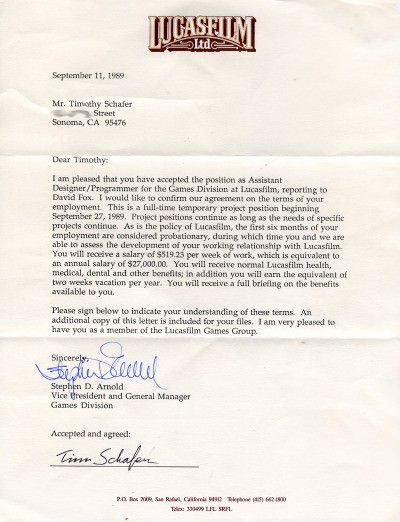 You can not imagine how excited I was to be getting $27k a year. I was so excited I put an extra hump in the “m” in my signature.

I still get kind of excited looking at that letter. Check out that old-school Lucasfilm logo. I was so excited by all that talk about dental benefits and vacation. Dental benefits! Just like a real job! I don’t have to work on databases! I’m going to work at the company that made Ball Blast—I mean, Ball Blazer, Rescue on Fractalus, and Koronis Rift! Oh, and Star Wars!

Thank you, David Fox, for hiring me even though I messed up the phone interview. And thanks to everyone who I’ve worked with in the intervening 20 years! I’ve always been lucky enough to work with amazing people, and in general, I’ve had one of the luckiest careers in gaming. So thanks to everyone who’s helped out along the way, and especially everybody who has played the games!

And for everyone on a job hunt right now—good luck! Don’t do what I did. It only worked in the 80s!