Voting is officially over! No more votes, please. The winner of the 2008 Double Fine Pumpkin carving contest is… 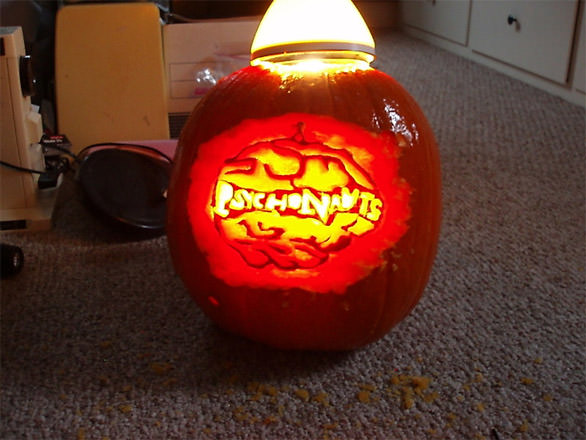 Now some of you might dispute the results of this competition, calling them unfair. Some might claim that we didn’t actually have a Double Fine Pumpkin Carving Contest this year. And that is true. I was busy traveling around Tennessee to organize one. BUT that didn’t stop Christina! She was self-motivated enough to carve this lovely Psycho-pumpkin and sent us the pictures without being asked. And I like that kind of pumpkin gumption.

(Aside: “Pumpkin Gumption” looks like it would be really fun to say, but it’s actually not.)

Even if there had been a full-on contest, with all sorts of fancy advertising, voting, awards, and multiple applicants, I’m sure Christina would have won anyway. Just look at that pumpkin! Notice the following positive attributes:

-It’s obviously slathered in some sort of delicious butter, or the kind of “posing oil” that bodybuilders use. It really catches the light and shows off the pumpkin’s handsome crevices.
-It is wearing some sort of glowing Pope hat, which is a strange but effective touch in these spiritually bankrupt times.
-If you look closely, you can see some sort of orange pumpkin dandruff on the carpet around the base. This adds to the realism, and probably took a long time to create and scatter in such a pleasing manner
-In the upper-left corner of the picture, is that a… sewing machine? Wow. I was impressed when I thought she had carved this pumpkin using standard tools, but now that I know she SEWED it on a SEWING MACHINE… I don’t know what to say. That is super hard to do. And it requires special needles I’m sure.

So, It’s no contest. And I mean, literally, there was no contest at all. But that didn’t stop Christina Patterson, American Hero. Who may or may not be American.

Christina, if you ever come by Double Fine, I promise to buy you some Peanut M&Ms from the candy machine in the garage, and if the machine is out of Peanut M&Ms I will offer you a choice of a candy of similar or lesser value. You have earned it.

Happy Halloween! Thanks for playing, and carving.