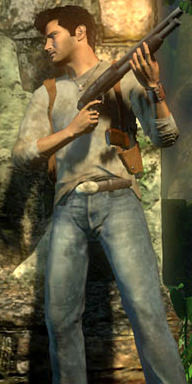 I just finished Uncharted: Drake’s Fortune, and I will tell you this: I liked it a lot. It had beautiful environments, fun platforming, and the awesome phrase, “I’ll kick you to sleep!” You should all go play it right now. It was all super next-gen, but the most next-gen thing about it to me was Drake’s shirt. Check it out: Somehow it’s tucked in, and yet not tucked in, at the very same time. Of all the technical marvels contained in Uncharted, this was the one that really mystified me.

Yes, the shirt was dirty, like he had partied in it all night, passed out, threw up on himself repeatedly in his sleep, and was then left in a ditch outside of town by his mean friends. And by the time he walked home his shirt was dry, so he just said, “The hell with it. Let’s go find some treasure.”

So, on his left side, he tucked the shirt in, to show his trim figure and stylish belt buckle. “What a handsome young man,” you might say, “If he gets that shirt washed, he may date my daughter.” But his right side is untucked, like the shirt of a wild man, a renegade, a scoundrel. “What is that guy up to? Why is his shirt untucked? Does he not give a damn about me and my rules?”

At no time during the game does Drake stop and tuck in the loose part of his shirt. Nor does he ever just say, “The hell with it!” and untuck the whole thing. It remains in a state of half dress for the length of the game, through all sorts of climbing, jumping, and scampering. Jet skiing, swimming, and almost kissing—nothing can dislodge or fully tuck Drake’s half-casual shirt. It is draped in a purgatory state, half in, half out, never completely free. It’s like an unfinished symphony.

Then I realized what a clever invention the half-tuck is. How better to show off your rock-hard abs, but still create an air of nonchalance? Much like how a mullet shows the world your business side in the front, and your party side in the back, the half-tuck tells one story on the right side, but a completely different story on the left. In encapsulates the contradiction that you are: The shy extrovert, the organized slob, the guy who likes to shop at Banana Republic but also likes to fall into the Gap when he’s feeling a little crazy. The half-tuck reassures the ladies that you’re a man who cares about personal grooming, but who, at the same time, couldn’t give a f##k. Who doesn’t like that?

Of all the treasure I found on this quest, I think this little fashion tip is the one I will cherish the most.

We’re making a Costume Quest Cartoon with Frederator! May 15th 2015

Costume Quest is on iPhone and iPad! October 13th 2013