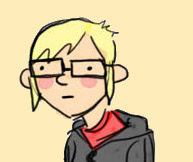 We’re making a small addition to our comics line up: Tasha!

Ha ha, get it? SMALL addition? Because Tasha is not very large? No? That joke not working?
Okay, I won’t mention her size anymore. Let us instead get right to the interview with our newest Double Fine Action Comics Artist!

DF: Tasha, you’re not just the newest DFAC artist, you’re also the least tall. What kind of pencil do you draw with?

TH: Hmm I don’t really like pencils. Usually I draw with a pen or computer.

DF: Tasha, your cats appear many times in your comics. Do they represent primal forces in your subconscious?

DF: Tasha, which of your cats do you like the most?

TH: I love them both equally, of course.

DF: Tasha, if you were driving both cats to the vet for a check up, and got into a car accident, and the car was on fire, and you lost one of your arms in the accident so you could only grab one cat, which one would you save first?

TH: I guess Snoopy since Mr. Peterson doesn’t like to be picked up. But she’s smart enough to survive on her own I think.

DF: Tasha, if you died in your apartment and no one found you for a week, do you think your cats would eat you?
Follow-up: Which parts do you think they would eat?

TH: Wow you are making me sound like a crazy cat lady.

DF: Tasha, if after that accident, you and the cat you saved were on a tour of an art museum, and you were looking at your favorite painting by your favorite artist in all of history, and the museum caught on fire and burned off your other arm, and you had to save either the painting or your cat by carrying it in your mouth, which would you choose? The painting or the cat?

DF: Tasha, if you were an armless woman living alone with one cat and no art, would you resent the cat?

TH: I would teach the cat to do finger painting. Oh wait, I don’t have any arms… toe painting.

DF: Tasha, if you were a one-armed cat in an apartment with a dead woman, which part of her would you eat first?

Behold the Most Frightening Action Comic of ALL TIME!!! October 7th 2009