A new picture of Psychonauts Internationale has come in over the Action News teletype machine. Look closely and you’ll be able to see some clues as to it’s origin. 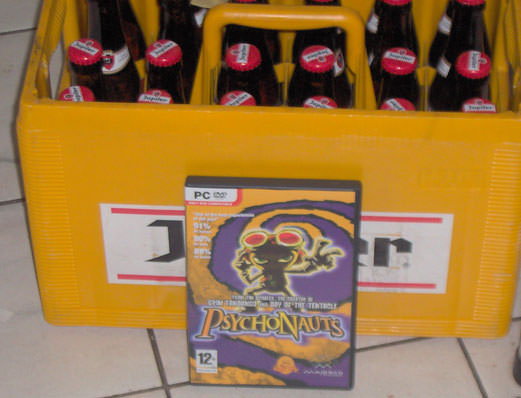 At first you might think, well, it’s a picture of beer, so it must be from Germany!

The first clue that this picture might be from non-German origins was that the picture came later than the others, and as we all know, Germans are never late. So we took a closer look at the photo and noticed something surprising…

Ah ha! The word “Jupiler” appears on the bottle cap. That means this can be a case of no other than “Jupiler Pils,” a popular beer…

Could it be true? Could Psychonauts actually be out in a second European nation?

We immediately had our top engineers put that photo through every possible test and enhancement they could devise. We ran spectrographs, polygraphs, and carbon dating. But no matter how much Belgian beer we drank, we came no closer to cracking the DaVinci Code of this picture, and by “DaVinci,” I mean a code that could only be solved by Tom Hanks.

But then we focused our attention to the upper part of the photo and noticed something we hadn’t seen before. Could this possibly be some sort of clue to the pictures origin?

I don’t know how we missed it, but if you look closely, you’ll notice a young Belgian man standing on top of the beer. As the more well-traveled of us know, this rarely happens in Germany.

This is all starting to fall in to place, like a Chinese Rubik’s cube. Here’s what I think. I think the young man that you can see standing on the beer is named “Michiel” and I think he is from Belgium, and I think he purchased the Excellent Game in the Softwareshop in the shopping mall in the city Sint-Niklaas, but I think he got the last PC copy they had there, but I think he thinks you can also get it at any of the Gamemania stores. All of this information I surmised from the friendly email that Michiel sent along with his mysterious picture.

Thanks for the photo, Michiel! I’m glad you went with the case of beer instead of the waffle. I know you guys have some super thick waffles over there, but I still don’t think it would have supported your weight as well.