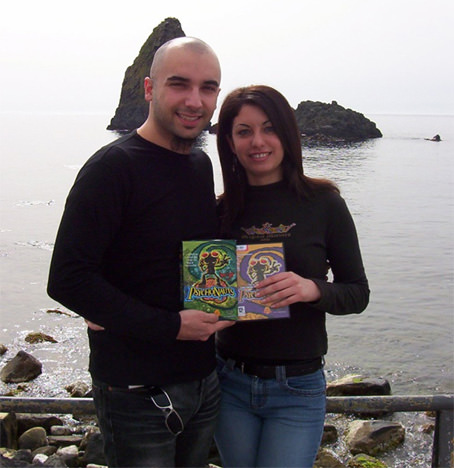 Okay, I have to admit, I got this picture, like, eight years ago. I just never put it up because I thought, surely, tomorrow I will be able to think of something funny and/or mean to say about them. Every day I thought that, for the last million years. But what could you say about these two lovebirds? Giuseppe and Agata from Sicily have everything! They’re young, and in love, and they have TWO copies of Psychonauts! They don’t even have to fight over it. They can both play at the same time! And look at the awesome sunglasses that Giuseppe has! How cool is he? Those rocks behind them are famous rocks from Greek myths. And they can eat Italian food every night and, apparently, not get fat. Oh, but I can’t resent you, young Italian lovers. Because you love Psychonauts so much. And because I’m half Italian.

(I’m actually not half Italian, but I’ve learned that it pays to just say you are as much as possible because every once in a while it will get you out of a speeding ticket or into a fancy restaurant, if the cop or the host is, themselves, Italian. Saying you’re Norwegian gets you nothing except for a polite grunt or maybe a silent stare. We are a cold, cold people. Luckily my wife is half Italian, when we have kids they will be able to speed down the highway eating lutefisk as much as they want.)

So, like I said, I’m half Italian. To all of my fellow Italian’s I say to you, “Amo i Pesci de Babel!”