Japan came by the other day to say hi. It was awesome. Our first Japanese coverage ever!

I just hope the caption under this picture doesn’t say, “We needed to use the bathroom so we went into this building and found some free beer and chips and this guy came up and started talking to us and we decided to see if we could get him to punch himself in the face.” 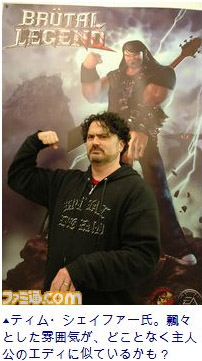 GAMEWatch
“EA announced officially new action game “BRUTAL LEGEND””, rampage through heavy metal fantasy world with ax and guitar!!”
“An unprecedented action adventure jammed all heavy metal story in fantasy!”
“The greatest feature of this title is the view of the world. In a word “Soak the gothic fantasy world in the heavy metal taste”.”

Famitsu.com
“Focus on “BRUTAL LEGEND” heavy metal and fantasy is fascinating.”
“This is the novel work taking rock elements in the fantasy world.”
“Wanna play this has the unique world setting and jammed developer’s shtick and persistence!”

4Gamer.net
“EA revealed “BRUTAL LEGEND” stirring the soul of rock hotly in the private conference.”
“This is the fusion of Rock and Fantasy!”