HERE is the press release.
HERE is Sierra’s official website.
HERE is where you can PRE-ORDER the game from GameStop and get a FREE T-SHIRT!!!
HERE is Double Fine’s product page about it where you can buy a totally different t-shirt.

Brütal Legend is our new game and we’ve been working on it forever and you are now free to love it with all your heart and pre-order about ten thousand copies each.

Let me just tell you about this:

When I was ten years old, I had no idea what kind of music to listen to. The only album I had was a 45 of Steve Martin singing “King Tut.” I had a little, monophonic radio by my bed that I used to tune in Dr. Demento once a week. Other times, I would twist the knob around and listen for something else. One time I stumbled upon, “A Fifth of Beethoven,” the disco version of Beethoven’s fifth symphony. (Remember, this is the 70s.) I thought, “Yeah, this is pretty cool. I’m probably pretty cool for listening to this.” And then my older brother walked in the room.

“What are you listening to?” He asked, horrified. He was fifteen.

“Um.. Nothing.” It was like being caught with a dirty magazine, but worse.

He stared at me for moment, listened to the disco Beethoven, furrowed his brow, and then said, “Come with me.”

He led me down to his room, and he told me to sit on the floor while he flipped through his record collection. He pulled out a strange, dark record, and put it on the turntable.

It popped and crackled and then was silent. Then it all began, with the bass drum. “Thump. Thump. Thump. Thump,” like the footsteps of an angry giant, coming down the hallway to kill us.

But, instead of hearing a knocking on the door, I heard a sound that made me feel like my brain was being electrocuted. It was an electric guitar, but it was as if steel cables were uncoiling inside my gut, turning my body inside out. And the evil sound just got deeper and expanded until I was flayed open, a mass of gurgling blood. Then, a commanding voice announced itself. An enormous, malevolent, Satanic robot, with red eyes and chrome teeth.

“I… am… IRON… MAN,” it growled. And then one of the most famous riffs in all of rock grabbed me by the collar, dragged me up a steep stairway, twirled me over its head, and tossed me down the stairs. And I loved it.

That was the first time I heard Heavy Metal. It was big, loud, powerful, threatening, and weird. Everything I secretly hoped to be as a teenager. Growing up in a small town, looking at the same old things every day—the kids you know in school, the teachers, the streets, your room—you start to wonder, “Is this really all there is?” And Heavy Metal, just like fantasy, science fiction, and video games, says, “No. There are worlds out there that you can’t even imagine.” And one of those worlds is exactly what we’re building for this game.

“Of course,” you exclaim, slapping your forehead. “A Heavy Metal game. Why didn’t I think of that? In fact, why aren’t ALL games exactly like this?” And it’s a good question. Why aren’t all games Brütal Legend? They should be. But they’re not, and I think part of the reason is that publishers fear the Legend. You’d be surprised how many of them asked us to change the music to something more innocuous. One of them asked, “Does the main character have to be a roadie?”

Ho ho! But not our pals at Sierra. They have embraced this game like a mama bear hugging a baby cub. And when the cub was hungry, the mamma bear reached into the creek and pulled out a salmon for us, named Jack Black. And he was delicious. After we ate that salmon (and by “ate” I mean cast him in our starring role, the roadie Eddie Riggs) the baby cub said, “That salmon was perfect, but now we’d like something sweet. Maybe a thin chocolate wafer,” the momma bear reached into that cool, mountain stream and pulled out Lemmy Kilmister from Motörhead. And when the baby bear said, “And maybe a single espresso,” the momma bear pulled out Rob Halford from Judas Priest. And when the baby bear said, “Oh, I’m so stuffed. But you know what would really hit the spot would be some Ronnie James Dio,” the momma went into the woods and found a hunter. She stalked that hunter for days, and then charged him, tackled him, and tore out his guts. Then she ate the guts, all except for the heart, and she brought the heart back to the baby bear, and said, “Here. This is Ronnie James Dio.”

I think you know what I’m talking about.

After that, the momma bear did many more things. Awesome things. Unspeakable things. And the baby bear was happy. But the baby bear can’t tell you what they are, because they’re secret, and because bears can’t speak English.

The moral of the story is that Brütal Legend is going to be the best f***ing game you have ever played.

Please be patient, though. It’s going to take us a little while to gather up every single piece of awesome there is in the world and put it in this game.

To the publishers who missed out, I offer you this message of consolation from Lemmy and me: 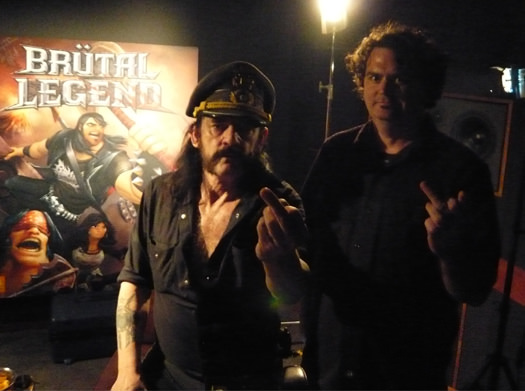 Let’s talk about the VGAs some more and never stop until they are here! December 10th 2008