Okay, we have heard from Germany! We have exciting news!
Multiple sources have confirmed it: My German is terrible!

Well, the jokes on you because that wasn’t my German, that was the Internet’s German, and therefore it’s OUR German, and since there’s only one of me and millions of you, mathematically, my percentage of the blame here is very, very small. Most of it is, I’m afraid, yours.

But lets not dwell on your mistakes! Let’s talk about what else is going on in Deutschland! Specifically, The Excellent Game Psychonauts! We now have actual, written communication from German nationals who claim that not only is Psychonauts available in stores over there, it has been since last December. Wow, they are so advanced! I thought the official release date was FEBRUARY 10. How are they so ahead of their times?

Unless… they’re lying. They could be lying. Okay, German friends, I need some proof. If you are in Germany, and have purchased Psychonauts, send us a picture of you and your Excellent Game. Please include…

Eine: Your face Zwei: Something to prove you’re in Germany, and Drei: The box.

I’m talking about the real box here, not a picture of your monitor showing a hacky version of Psychonauts you downloaded from Bit Torrent. You must be holding the glorious, yellow and purple box. Send it to us and I’ll post your picture here as news. One thing you should know is I might have to make up some things about you in order to classify your picture as news, and by reading this sentence you are granting me the legal right to do so.

And if you aren’t in Germany, but you have a PAL version of the game, I would really like to know that too. I want to keep tabs on it’s progress across Europe. We’re tracking the spread of Psychonauts in much the same way that they are tracking the Avian Bird Flu. And for much of the same reasons.

Well, to sum up all of that, let me just say this: 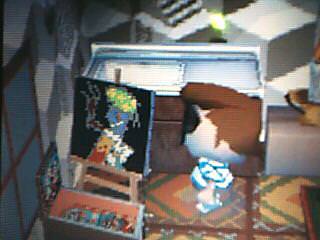