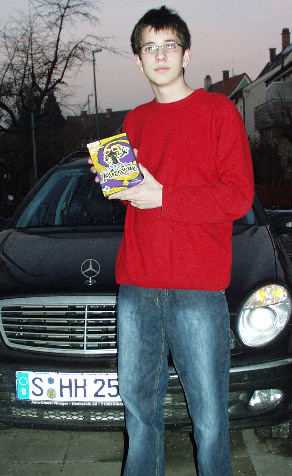 I mean, who doesn’t? What’s not to love about Germans?

At least that’s what my research so far has shown. Also, approximately 66.6% of Germans wear glasses.

Pictured on the right is German Psychonauts fan number two: Benedikt Hummel! Benedikt has proven that he is in fact in Germany by posing in front of some weird brand of car that they only have over there. What is that crazy thing? Judging by the logo, I’d say it’s some sort of “Peace Car” But, ha ha, they got the symbol wrong! But don’t change it. It’s cute that way!

Benedikt, what I want you to do is drive that thing over to Mischa’s house and play Psychonauts together and become best friends. I don’t want you to play Far Cry while you’re over there. Just Psychonauts. Tell him that when you are trying to climb around that spiral cage in Meat Circus that you have to double jump off of it and then PSI Float back if you want to live. And also, some people think it’s easier to do on the inside of the cage. I want you to tell him these things, and then tell him about your childhood and then swear to be best friends forever. And then I want you both to go over to this guy’s house: 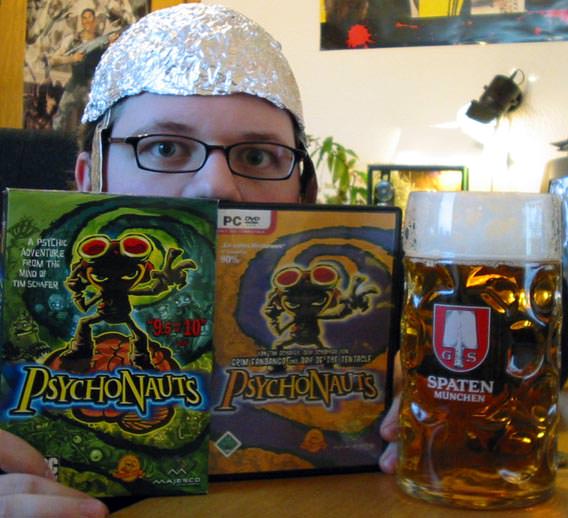 Christian Kressing is Germany’s third ever Psychonauts fan! He might be the first actually, because look—he has the older, green version. He must have mail-ordered from the Awesome Country America. And then, understandably, he could not stand playing just one copy. He had to have the European version as well! And even that wasn’t enough. He had to get a big old beer to drink while he played. Did that satisfy Christian’s desire to immerse himself in the world of Psychonauts? Nein!!! He had to make himself a foil helmet, just like Dogen Boole wears in the Excellent Game. Still that was not enough for this incredibly passionate German fan!!! Ultimately, Christian was forced to rub his nose on both copies of the game, simultaneously, while wearing the hat and touching the beer with two foreknuckles. Ah, now that’s pleasure in gaming. I’m sure the Germans have a word for that. If not, might I suggest…Spielvergnügen?(side note: That last sentence utilized underlining, italics, AND bold text. I needed to emphasize three different things three different ways. I hope your internet browser can handle it.)Anyway, Christian, better pour two more glasses of “die Maß” because Mischa and Benedikt are tearing up the autobahn on the way to your house, and they are THIRSTY. Thirsty for beer…...and thirsty for Spielvergnügen!!!