There is no Weekly Double Fine Action Sale of the Week this week. The normal sale has been ruthlessly trampled underfoot by the enormous lumbering mass of MUCH MORE IMPORTANT NEWS (and also another sale).

Remember back in 2009 when there was supposed to be a Brütal Legend art book coming out soon? You don’t, because nobody remembers anything that almost happened that long ago. That doesn’t matter. Because Udon Entertainment has just announced The Art of Brütal Legend in hardcover and paperback, coming November or December of this year.

It’s packed with only the most metal artwork, from Double Fine artists (and friends of Double Fine) including Scott Campbell, Peter Chan, Mark Hamer, Razmig Mavlian, Lee Petty, Levi Ryken, Nathan “Bagel” Stapley, and others—if you’re a Double Fine Adventure backer, you may recognize many of those names. We kept them around because they’re good at arting things, and this book is proof. Here’s the cover: 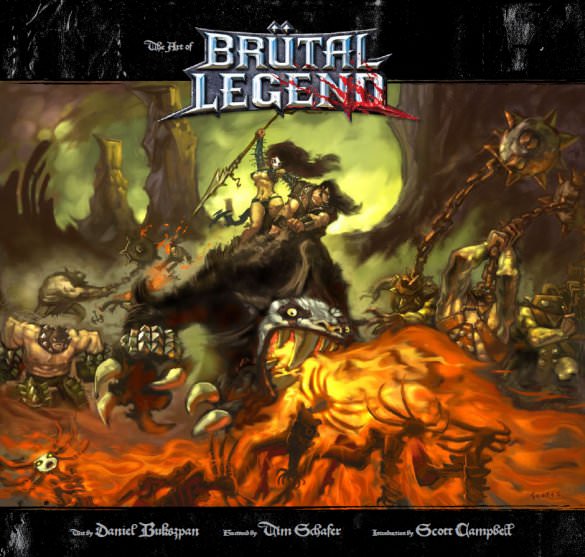 And here’s a sample of spreads from inside:

The book is still four months away, so break out your copy of Brütal Legend and relive the metal.

What’s that? You lost the copy of Brütal Legend that you had obviously once owned? I guess we can mark down copies of the game to $10 this week. Just for you. Wait, you want it signed? By Tim?? Alright, we’ll discount that as well. Sheesh.