Last week, Double Fine Productions was host to a critical scientific research event. It was documented by programmer Brandon Dillon. Here are his findings.

Abstract
Many humans claim to have a preference between the soft drinks Coca-Cola® and Pepsi-Cola® (hereafter referred to as Coke and Pepsi). We conducted an experiment on humans in the employ of Double Fine Productions to look for evidence that humans are even capable of distinguishing between the two sodas.

Hypothesis
Participant convictions towards their capacity for soda differentiation will be consistently strong, but will not be borne out by empirical trials. In layman’s terms, everyone is full of crap.

Two eight-packs of 8-oz cans of Coke and Pepsi were purchased from a local grocery store and refrigerated side-by-side in Double Fine’s drink refrigerator for a period of 24 hours.

The trials were run by two experimenters.

The first experimenter labeled five otherwise unmarked cups A-E. The experimenter then flipped a fair coin and recorded the results of the flip. For each corresponding “head” flip, a finger of Coke was poured into one cup; Pepsi was poured for each tail. Precise measuring tools were not necessary because the experimenter has a master bartender’s pour.

The trial setup was done in a room separate to the other experimenter and all trial participants. To heighten the quality of the experiment, the room featured dimly lit mood lighting and a large collection of rad black velvet paintings.

Once a trial was prepared, the other experimenter was called in, transferred the five glasses to the testing chamber (known colloquially as “the lunch room”) and administered the test to a participant. 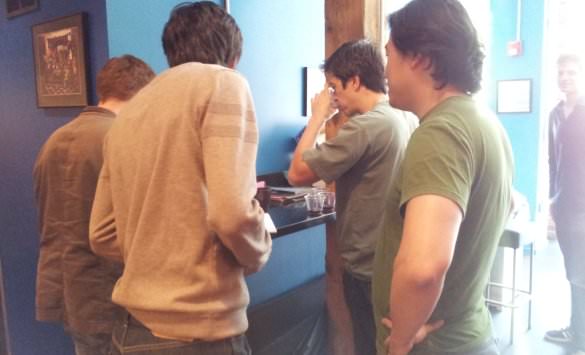 Participants were free to approach the tasting via means of their choosing for any length of time. 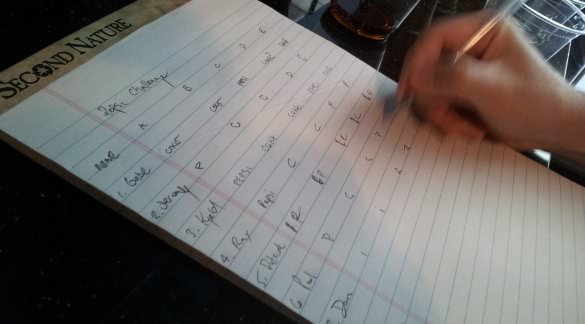 Participants would then record which product they believed were contained in each cup. Some participants chose to place question marks (?) next to guesses to express a lower relative confidence level of a given claim.

All participants expressed confidence in their ability to distinguish brands prior to trials.

No single participant correctly guess every cup’s contents in their trial.

Furthermore, no participant incorrectly guessed every cup’s contents. This result would correlate with the ability to effectively distinguish between the products, despite an ability to correctly assign differentiated tastes, which would have been evidence in opposition to the hypothesis. That is to say, a participant who incorrectly guessed every single cup’s contents would still have consistently identified a difference between the two products. 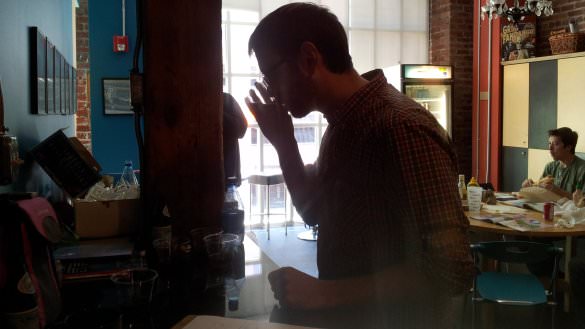 Participants offered excuses including the following (not an exhaustive list):
• “I could definitely distinguish the first two, but then the flavors mixed too much in my mouth.”
• “I’m sure I could’ve done it if I had a reference can of Coke or Pepsi with me while doing the trial.”
• “If I keep practicing, I can get good enough to tell the difference.”
• “I went to the dentist this morning and the fluoride is messing with my taste buds.”

The most successful participant was Gabe Cinquepalmi, who correctly analyzed all cups but one, and expressed less confidence in his single incorrect answer.

Conclusion
Gabe Cinquepalmi is not human.