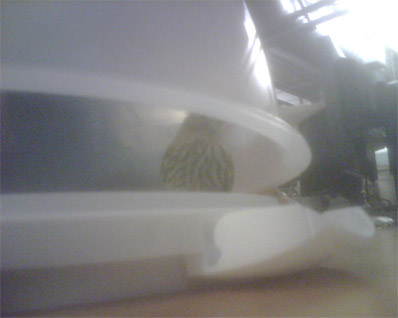 If you are unable to comprehend the above image, it is because your optical cortex has been tied into knots by primordial fear. What you are looking at—what your brain is trying to protect you from—is the image of a wild animal that recently attacked Double Fine Productions without provocation. It may just look like a tiny, brown bird, trapped in a plastic cake plate by some brave hero. But… well… yes, that is exactly what it is. But more interesting is what it WASN’T: It WASN’T not terrifying.

There were just a few of us here, working late, doing what we always do—killing ourselves to create a few hours of entertainment and joy for people who we have never met. And then this rabid hellion from the bowels of the sky burst forth through an open window, and showered us with terror and probably incurable flu. Beating its terrible wings, gnashing its horrible claws, shrieking mean-spirited obscenities it carved a jagged path through the unsuspecting air of our offices, finally descending to its unholy perch atop Lance’s xbox dev kit. Where it proceeded to say nothing.

Several of our employees were already dead by this point. (Oh why did I hand out those cyanide capsules to every employee?) Those who were left had all passed out, or wet their pants, or lost interest and returned to work. But there were enough witnesses remaining that I could hear them gasp in awe as I fearlessly approached the handless, toothless, lipless abomination.

“Screw you, and your American Bill of Rights,” it said to me, with its eyes.

“Birdie,” I said, while slowly picking up the cake plate from Caroline’s desk and wondering when the email went out about there being cake in the office and how I had missed it.

“What?” It thought, menacingly.

“What were you going to say?”

“You said, ‘Birdy,’ like you were about to say something to me.”

“Oh, sorry. I was thinking about cake. Where was I?”

My pupils dilated one millimeter. I slowed my heart rate down to one beat per minute. I voided my bowels as a precaution.

“Birdie,” I said, “Now you’re messing with a son of a bit

And before it could even draw its tiny gun, I slammed that hateful clot of feathers into that cake plate so hard, its dead relatives, cold in their graves, tasted frosting.

“Carry me to yon window,” I said to the cheering crowd who had hoisted me upon to their shoulders. And when they did, I leaned out the window and opened the cake plate, and released the bird. This was last Tuesday, the 19th.

So next time you are eating cake at Double Fine, and you find a feather in your mouth, just be aware that you are tasting history.