Psychonauts is on a lot of things these days. It’s on this Forza car, for example. 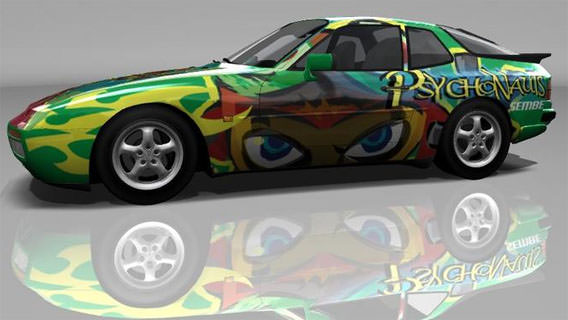 In fact, if you look today, it’s even on the front Page. Woo hoo!

I’m glad that it’s available on Gametap, because soon you won’t be able to buy it in too many other places. I just found out the other day that Psychonauts is officially OUT OF PRINT.

That’s right. We tried to order more copies for our company store, but our friends at Majesco informed us that the warehouse had been cleaned out, and there were no plans to make any more. We still have some copies in stock in the Double Fine Action Retail Operation (located up front, by the printer, next to the place where Daniel’s supposed to put that plant), but once those are gone, I just don’t know where you will be able to buy a box of the Excellent Game anymore. According to the last royalty statement we got, we’ve sold about 400,000 copies, not counting digital distribution, or our company store. So maybe that means there are, like, 100,000 copies out there in “the channel” as the kids in marketing say. So mayyyyyybe you could still get one. But just to be safe you should probably buy about five copies right now, before the rush starts. (Plus, an extra five to sell on eBay someday, which will surely put your kids through college.)

I’m torn on how to feel about this news. It used to be very final and sad when a game went out of print, but now that it can live on through digital distribution, it doesn’t feel quite so dire. And it also means that there’s not a big warehouse of unsold Psychonautses somewhere in Jersey.

So, hopefully, Raz will live on through channels like Gametap and Steam and Trygames and in the hearts of pure-hearted gamers everywhere.

Oh, and in Europe. THQ is still pumpin’ those out, bless their purple and yellow hearts. Go, PAL!