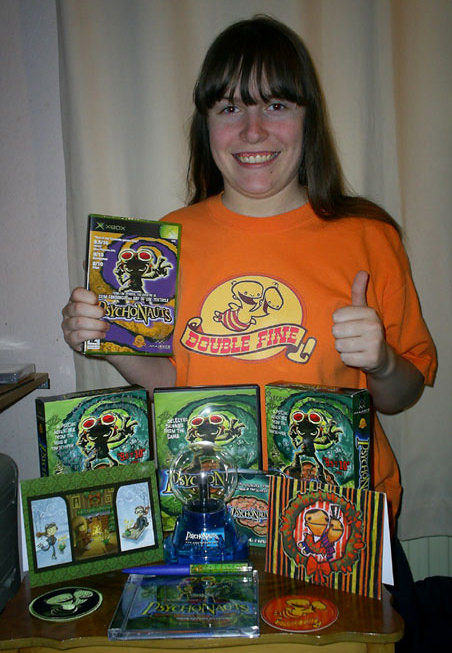 You may not have even realized there was a contest, but that's okay, because I didn't either. But there must have been one, because Charlotte Woolley is clearly the winner. I mean, look at that picture!

Charlotte is now our #1 superfan in the UK. Our #2 superfan in the UK? Charlotte's sister Catherine. Why didn't Charlotte let her sister in the picture? Because Charlotte knows that, sometimes, being mean is part of being a winner. It's not the only part. It's just the most fun part.

I'd like to thank Charlotte personally for buying the PAL version of Psychonauts, a patch, a sticker, a floaty pen, a soundtrack, two kinds of Christmas cards, and two signed copies of the PC version. I hope we never make a game that disappoints you, Charlotte, because I hate to think of all the time it will take for you to burn all that stuff.

Now then, Catherine, why can't you be more like your sister?