(That stands for Personal Computers, in case you’ve forgotten.) 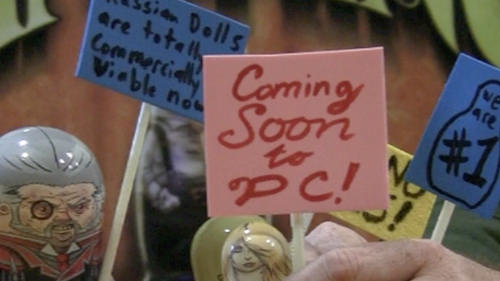 Stacking, the awesome game you love in which Russian dolls cavort and solve puzzles, is coming to the PC! Also, it won this awesome award from G4!!

Hit Read the Rest to see the official press release!

SAN FRANCISCO, CA – December 16 —Double Fine Productions is happy to announce that Stacking, the Russian Doll Adventure recently named Downloadable Game of the Year by G4TV’s X-Play, is coming to the PC.

“I had nothing to do with this,” interjected Steve Dengler of Dracogen Strategic Investments, even though he totally funded the whole thing.

“Please, it is Christmas time and I prefer my good deeds to be anonymous, like Santa,” he added.

“Ho ho ho, that’s not Christmas talk,” said Santa Claus, who had slid into the room through the chimney without anyone noticing. “Christmas is about the spirit of giving, like how Double Fine is giving away the excellent DLC adventure The Lost Hobo King along with Stacking.”

Lee and Steven scowled at each other for a bit longer, but then they had to laugh and agree that Santa was right, and everybody gathered around to hug and sing Christmas carols. They sang about what an awesome game Stacking was, how great the Lost Hobo King DLC was, and how lucky everyone was that all this joy would be available on Steam, in the Spring of 2012 at the bargain price of $14.99. It was a strange song that didn’t rhyme much, but it was heartfelt.

And Lee’s mother, who is a saint, never found out about any of this.

Double Fine Productions is a San Francisco-based game developer that makes games with a focus on creativity, characters, and fun. Since its founding in 2000, it has produced the award-winning titles Psychonauts, Brütal Legend, Costume Quest, Stacking, Iron Brigade, and Sesame Street: Once Upon a Monster. Learn more about Double Fine at www.doublefine.com.

Dracogen Strategic Investments is the creation of Steven Dengler-father, gamer, entrepreneur, pilot, co-founder of XE.com Inc., and all-round geek. Dracogen is committed to making awesome things happen whenever it can. Besides backing some pretty amazing tech companies, it also supports fun creative projects and has a particular affinity for Child’s Play Charity. Learn more about Dracogen at www.dracogen.com.

Lee Petty’s mother is a saint.

Please allow me to introduce you to… CHARLIE BLACKMORENovember 23rd 2010