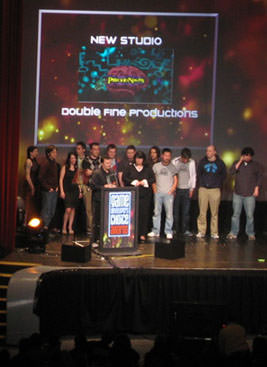 Look buddy, YOU try making a good speech when you've got an auditorium of people staring you down! I was just happy that I didn't puke because I was so happy I could have puked at that moment.

When Double Fine won the award for "Best Videogame Company in the Entire Goddamned World Ever," I really could have puked out a million chunks of joy. But even if I had done that, and if those multicoloured chunks had flown out of my mouth and bounced down upon the audience in slow motion, to the gentle sounds of an acoustic guitar and Spanish-style singing, even that wouldn't have expressed all the love I felt at that moment.

Winning "Best New Studio" at the Game Developers Choice Awards was really great, because it was given to us by our fellow game developers, and because it called us "new".

Even though we have been around since 2000, it was great to be reminded that we are still new, in that Psychonauts was the very first in what we hope to be a long list of games made by us, Double Fine.

Best Writing was also a great award to get, but it's going to take me forever to scratch Erik's name off of it. Man, he thinks he's so great.