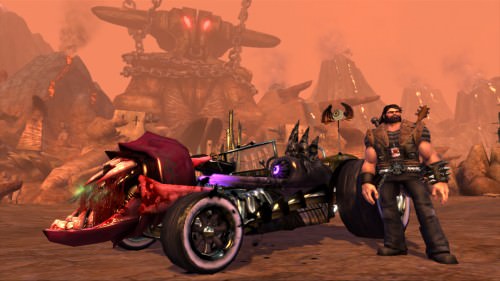 Here’s a picture of me on my recent vacation, and by “vacation” I mean…

...playing the awesome game Brütal Legend after downloading the Hammer of Infinite Fate DLC. Check out my burly Mountain Man threads. They’re so rugged, they cause Eddie to spontaneously grow a beard.

What’s that awesome car next to me? That is your old pal, the Druid Plow, tricked-out with the Coiling Maw on the front—very deadly. (And the teeth cast shadows!) You can also see the Eye of Sorrow there, which is like Ophelia’s Weeping Heavens guitar solo, except tied to the front of your car. And, my favorite thing in the whole DLC pack: I have the Oculus of the Lost on my antena. The Oculus of the Lost points at any undiscovered Bound Serpents, Buried Metal, Fire Plug Jumps, etc as you drive around the world. Which is awesome because I can’t sleep at night thinking about those six Bound Serpents that I left gagged.

Now, I know what you’re thinking—I could just make our designers give me a cheater map so I could find all these things myself, but where’s the fun in that? Why make the poor designers do that, especially when I can make them do other things like eat bugs and clean my room? The Oculus is much more fun because there is still some hunting required, and it gives you an excuse to cruise around in your newly-painted Deuce, listening to awesome music, running over animals with your Coiling Maw.

Just go into the Motor Forge to find all this stuff after downloading the HoIF. You’ll also find new Deuce paint jobs (Psychonauts!) patches for Eddie’s vest (2hb!), and new heads for Mount Rockmore. (Yes, one of the heads looks a lot like me, but before you judge, listen: It wasn’t my idea! Lee Petty did it because he has a crush on me. If I reject these little tributes, he might turn into a violent stalker. So please indulge him. You get an achievement for it!)

AAAANND there are new maps! Four new awesome maps, including one where you need to protect your army from the massive hammers the Titans are crashing onto the battlefield. And there’s the Altar of Blood where players can throw a switch to drown their enemies in blood. Creepy! And fun. And a good lesson to the kids about the hazzards of blood. Kids, if you see a flood of blood coming your way, RUN.

Same thing goes for if you see a bearded man with a flying eyeball on his car antena.

Brütal Legend Is Back On Vinyl October 22nd 2020

Furious Roadie: Brütal Legend on Sale today only! May 23rd 2015

Celebrate Rocktober with Tim! On the internet! October 11th 2012