I’m so glad we have the NEWS THREAT LEVEL system in place. Now I can post crap like this and not feel an ounce of guilt, even though it is a total and complete waste of time! Woo!

This is actually game-related, in a way. It’s about the Excellent Game Psychonauts, and also about how children are our future, too. And cat pee. There’s a little cat pee at the beginning. I advise you not to read this.

Tasha is game-related as well, because she works here, on our game. And she’s in the story. She starts this whole chain of events, in fact, by selling me this horrible, stupid thing called a Litter Robot.

The Litter Robot is supposed to use robotics and future tech to neutralize cat box problems. Cats are supposed to enter the Litter Robot pod, turn around, and relax their tiny colons and void their GI tracts inside the robot’s Privacy Module. Then the Little Robot beams the waste matter into the future, where, hopefully, science has figured out a way to turn cat feces into gold or food.

But what happens is that my cats enter the Litter Robot, but then they fail to turn around. Turning around is critical for waste matter deployment INSIDE of the Privacy Module. Instead, they just walk in and say, “Oh, I guess I’m inside the Litter Robot. Time to let ‘er rip!” And then they pee straight back out the opening. Then they kick a bunch of litter out the opening as well. And THEN they turn around and leave. On the way out they pass the big pile of pee-litter they just created, and they must think to themselves, “Oh, ick. What dirty creature left this pee-soaked pile of kitty litter here? Gross. I shall write a stern letter to the management immediately after my nap!”

But enough about cats. Let me get to the part of the story that is about Psychonauts, and my genius daughter.

My brilliant idea: I need to get some sort of motion-activated novelty animatronic device. The sort of cheap toy they always have by the check-out counter at Walgreens—you know the kind of thing I mean. Like the talking wall trout, or the dancing Santa, or the wiggly Hillary Clinton. And in my plan I place this novelty device directly opposite the opening for the Litter Robot. Cats walk up to the opening and trigger the motion sensor, which makes the trout sing “Take Me to the River” or makes the Santa play “Jingle Bell Rock” on his saxophone and the cat says, “WTF? Okay I don’t know what that thing is, but I’m going to keep my eye on it.” So they step into the Litter Robot, and then TURN AROUND to keep tabs on the gyrating Hillary Clinton or whatever, and then everything goes where it’s supposed to go and the Litter Robot works and I’m a genius.

So yesterday I went down to Walgreens to get a motion-activated novelty device. The kind of thing I have seen one thousand times and never wanted and always wondered, who would buy such a thing? But now I wanted one and guess what? They didn’t have any! Oh, they had saxophone Santas, but you had to push a button to make them start! Push a button, physically, with your own finger. Like it’s the 1800s or something. What happened to the breakthrough motion detector technology that makes scary plastic skulls scream at you on Halloween? Have we regressed? Apparently we have, because I walked all over the store trying to find just one damn undulating snowman, but found nothing.

They are usually up at the front counter because they are an impulse buy. As I searched the entire store I could almost hear the Walgreens marketing guy saying, “You gotta put the Saxophone Santa up by the cash register. It’s an impulse buy. Nobody heads down to the store to buy one of these things on purpose.” Haha! Nobody does! You’re right! Except here I am. Today, I’m that guy. I woke up this morning and looked a the calendar and it said, “Today is the day you go get your talking trout!” So I packed up the baby in the Bjorn and headed down to the store to buy something that I have seen a million times and never wanted, but now I wanted it and I spent all day failing to get it, and my daughter watched the whole thing. I could feel her tiny brain re-evaluating my powers.

Refusing to give up, I popped into Big Lots on the way home, but no. There were no trouts at the Big Lots either. Double failure.

I did find a Kung Fu Panda Chia Pet, which is kind of Brütal Legend-related. 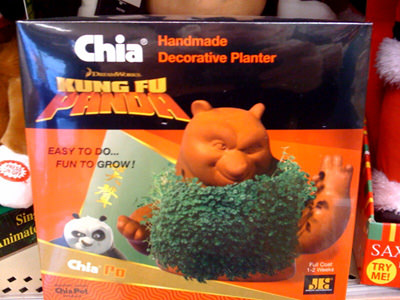 Man, I hope we get Brütal Chia Pets!

And then I found this. Who knew they had an Excellent Games section? 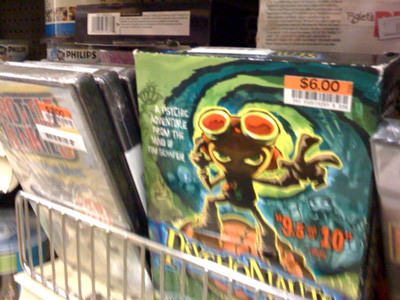 And as I stood there trying to figure out whether to be happy because I had stumbled on to an old friend in an unexpected place, or to be sad because it was down to six bucks, Lili grabbed the box and put it in her mouth, and that made me happy, the end. 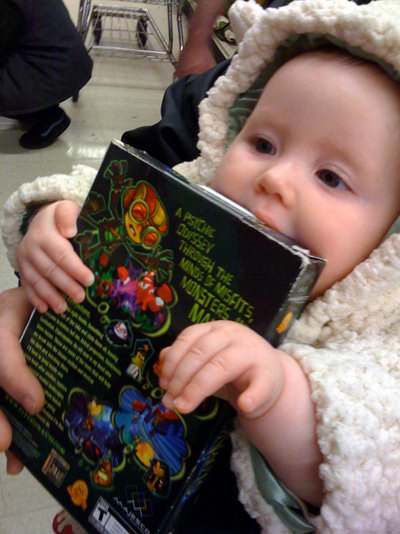 (Happy, until I realized that box probably has the flesh-eating bacteria all over it, and so I took it away from her and she started to cry but then I told her don’t worry, she can buy a signed copy at the company store. The End For Real.)