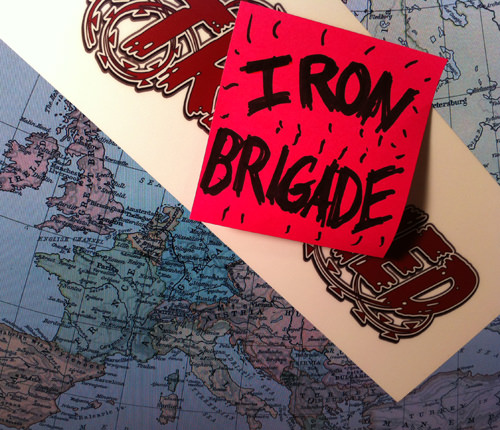 Sorry, but we had to wait for this whole Greek debt thing to get resolved. Also, Brad was really upset about the state of Italian politics, and vowed he wouldn’t release his game in Europe until Silvio Berlusconi stepped down. You can understand his feelings, I’m sure.

Anyway, the good news is that Iron Brigade will be out in Europe on November 30!

Also, on that fateful day, Trenched players worldwide will get an update that will rename their beloved game to Iron Brigade. WHY? Why are we forcing everybody to change the name of their game? Because if the names are different, if we did the Biohazard/Resident Evil thing, you would not be able to play a multiplayer game between the two versions.

Surprised? So were we! HAHA! That is the sound of me being so surprised when I found out we had to rename our game! HAHAHA! Joy and surprise! HAHAHA!

Anyway, we really wanted to make sure that everybody could play together around the world because our game is a game about LOVE. The ultimate goal of our game is, after all, nothing short of WORLD PEACE. So we went the Hero’s Quest/Quest for Glory route instead. Now we want all the children of the world to gather together, hold hands, and say “Iron Brigade” over and over and over again until they can’t even remember what it was called before. And then we want them to shoot Tubes together while sharing information about their disparate cultures.

As your reward for tolerating all these renaming shenanigans, Brad and his Band of Brohams are releasing a brand new (and 100%-free-to-you) SURVIVAL MODE, plus new LOOT. So really, this whole thing was pretty much totally worth it and I’m glad it happened. In fact, if anyone has any new ideas for a name, we could totally change it again! Woo!

Stay tuned to the official Iron Brigade website for more news about the upcoming DLC, Rise of the Martian Bear! Or whatever we change the name to later!

We’ve regained the rights to Iron Brigade, and fixed Steam matchmaking May 26th 2015

Iron Brigade PC is out! Livestream on Wednesday! August 13th 2012