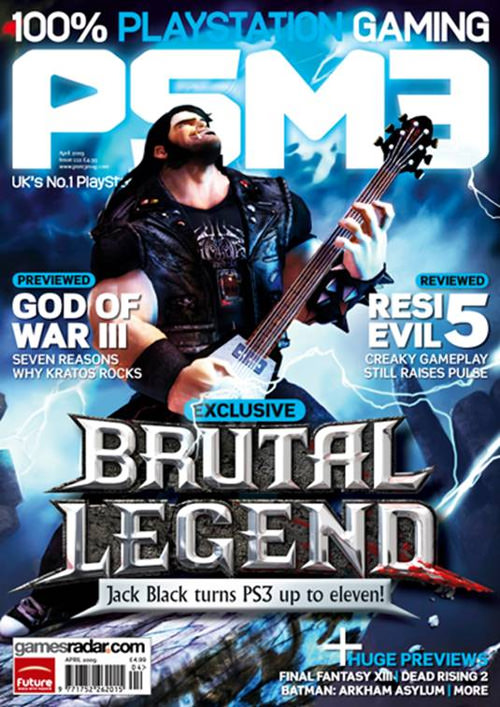 Quick! Go out and buy it while you can!
Brütal Legend is on the cover of PSM3 this month (issue #112).

“But that magazine is in the UK and I am not. Do I SOUND like I’m from England? If I do, that’s only because I have very good diction and was raised to have very proper manners and I just happen to like tea. But I don’t even know where the United Kingdom is. Is it a state? It sounds like an imaginary place,” you say. And I say nothing because I stopped listening a while back. You English people sure know how to talk!

Anyway, if you are in the UK go out and buy this magazine! If you’re not in the UK, I hear you can still find PSM3 at a big enough Barnes and Noble. I guess that makes mathematical sense. If the Barnes and Noble were as big as the entire world, for instance, it would definitely, probably, have some copies of PSM3 inside of it.

Unless the giant planet Barnes and Noble was not on earth, but in fact orbiting some other star. In which case, my only hope is that the people of that solar system like video games and buy Brütal Legend.

Brütal Legend Is Back On Vinyl October 22nd 2020

Furious Roadie: Brütal Legend on Sale today only! May 23rd 2015

Celebrate Rocktober with Tim! On the internet! October 11th 2012