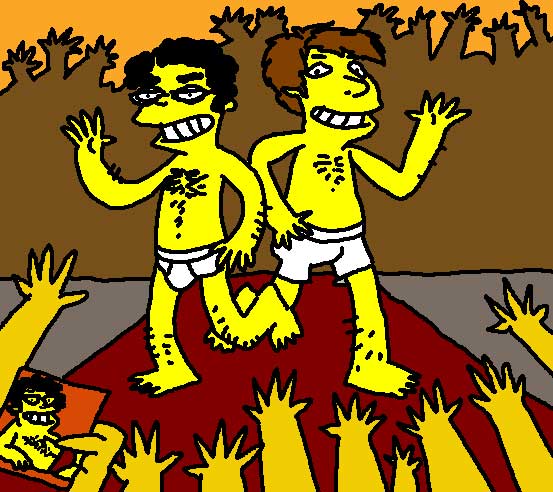 If you’re going down to Comic-Con this weekend you should mosey on by the Global Hobo booth because that’s where our very own Scott Campbell and Razmig Mavlian will be hawking their wares (I think they make some sort of comic-scented skin cream). These guys would would love to see you and touch you and have you apply your various loves to them. Don’t be shy! Here are some ice-breaker questions, in case you freeze up:

1) Where do you get all your ideas?
2) Raz, Is “the cave dweller” based on someone from from your own life?
3) Do you guys like to draw better in the morning, or at night?
4) What is your favorite kind of pen to draw with?
5) Don’t you guys think that shading is hard?
6) How do you draw hair? Do you have to draw each hair? Or is it okay to just draw a few, and they put a dot, dot, dot after?
7) Scott, why did you insist on making Meat Circus so difficult?
8) Nathan, how is your—hey, where’s Nathan?