Alright, I’ve reproduced. My work here is done, right? My genetic obligations have been fulfilled. So now I can just sit back and basically wait for death, no?

The thing is, Death, like the cable guy, won’t give you an exact arrival time. He just says, “Yeah, I’ll be there sometime between 8am and 4pm, from now to eternity, or whenever else I feel like it, probably when you least expect it.” So I figure I have to keep busy, and set new challenges for myself.

First challenge: to create the finest work of English literature ever, of all time. The best writing that money could buy, if the writing weren’t so priceless and beautiful and therefore timeless, and yet affordable. I wanted to scribe something that would actually justify the incredibly pretentious use of the verb “scribe.” I wanted people to think I had called up to heaven and said, “Hey, God. Is there any previously-unreleased material that you left out of the first two bibles? Like some forgotten wisdom or other out-takes that I can use to make life better on earth for humans?” I wanted to pull together a collection of words that have never been pulled together before and make them wonder where they had all been all of each other’s lives. I wanted to go back in time to the mind of the person who invented writing, and blow that mind.

Well, I have to say in my honest, conservative judgment… I did it. Frankly, I even exceeded those expectations. (When will I ever learn to stop underestimating myself?) Sweet success and a half. Everything that Guggenheim had in mind when he invented typewriters or whatever was encapsulated in this amazing document.

Unfortunately it was only two pages long. So I decided to pad it out with about 300 of Scott’s comics. Plus a Knight Guy board game, a bunch of sketches, a commentary section, some secrets of how to draw, and sexy pin-up art. (Not of me, though. Sorry.) And for legal reasons, we named it, “Double Fine Action Comics by Scott C (Vol. 1)” 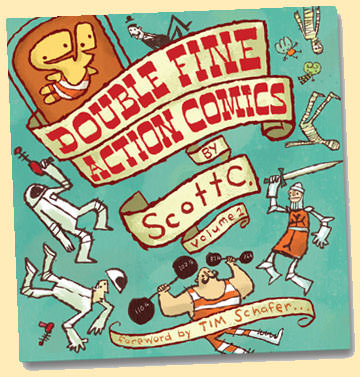 You can now buy this amazing book, and read it wherever you want. Remember how before you couldn’t read the Double Fine Action Comics when the power was off? Well, now you can. In fact, I suggest that when this book arrives, you shut off the circuit breakers in the house, huddle up your whole family under an old quilt, and gather around a candle to read The Double Fine Action Comics together. Just like how Abraham Lincoln used to read comics when he was a kid.

Get More from your Action Artists! December 23rd 2008

LIKE COMING HOME TO FIND THE TURKEY IN THE CRIB AND THE BABY IN THE OVEN. March 28th 2004